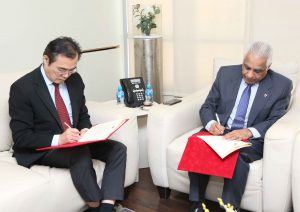 In a gesture of humanitarian monument, Dragon City, Bahrain’s largest whole sale and retail trade centre and only Chinese-themed shopping destination, signed a Memorandum of Understanding with the Royal Charity Organization of the Kingdom of Bahrain.

Signed on Wednesday, September 20, 2017, the memorandum with the Royal Charity occasioned the starting of a charity fund named “Dragon Charity Fund” which will contribute to the aid of less than well-off members of society.

Established by His Majesty King Hamad Bin Isa Al Khalifa in 2001, The Royal Charity Organization sponsors widows and orphans, in addition to caring for the elderly and those with special needs. The organisation provides Social, health and educational care, on top of helping reduce the cost of living for needy families.

Dragon City’s involvement with the Royal Charity speaks of its commitment to the concept of social responsibility, which seeks to promote the benefit of society at large. Thus, Dragon City develops its businesses while leaving a positive mark on the community.

Dragon City’s first donation to the fund was made on the 1st anniversary of its establishment in Bahrain, falling on the 27th December, 2016. The donated amount was the sum of contributions from Chinamex Bahrain Management Company, Dragon City’s operating company, as well as the Tenants of the mall.

Under this memorandum, Dragon City will make an annual donation to the Dragon Charity Fund, on the date of every anniversary. Donations will depend on the tenants, coming either in a monetary form or as various products that will provide relief to those in need.

Mr. Patrick Zheng Shou, General Manager of Chinamex, commented on this occasion, saying, “It is an honour to commemorate Dragon City’s founding with a contribution to such a noble cause. The signing of this memorandum emphasizes Dragon City’s keenness on the well-being of the Kingdom of Bahrain in which it operates, and its commitment to be an ethical business.”

For his part, Yousif Al Yaqub, Acting Secretary General of RCO praised the Dragon City’s initiative, stating that it reflects its keenness to promote the welfare of the society. The Spokesperson urged other Bahrain-based institutions to follow suit.

Dragon City is a first of its kind project in the Kingdom of Bahrain and it includes Dragon Mall, Dragon Apartments, Dining Village, Dragon Plaza and an allocated area for warehouses. Dragon City is home to more than 787 commercial units, effectively making it the largest wholesale and retail trading centre in the Kingdom of Bahrain. Located South-West of Diyar Al Muharraq, it is strategically located in close proximity to Bahrain’s International Airport, the state-of-the-art Khalifa Bin Salman Port and the Capital of the Kingdom of Bahrain, Manama, making it ideal and providing easy access to customers from both the Kingdom and beyond. Dragon City gives to its customers, including local consumers, trade customers and tourists, an access to a wide range of offers and high quality Chinese products.