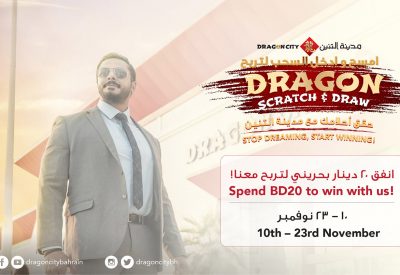 Everybody wins with Dragon City, the largest wholesale and retail trade centre on the island, that’s with the return of the centre’s amazing ‘Dragon Scratch & Win’ offer, which gives customers the opportunity to win instant prizes with every BD 20 they spend.

This comes as Dragon City announced that it has extended the offer this time to two weeks, beginning from November 10, 2019, to November 23, 2019. The mall explained that the extension comes as a token of appreciation to its customers for their trust and loyalty.

For every purchase worth BD 20 in the aforementioned period, customers will be given an E-ticket for the scratch-and-win, qualifying them to win many valuable prices such as handbags, Tv, home Appliances, shopping vouchers and much more. To win, shoppers are requested to stamp their receipts at the specially-made promotion stand located in the centre of the mall, where they will be assisted by Dragon City staff.

The promotion comes for the third time this year, consolidating Dragon City’s position as the first family shopping destination in Bahrain, ensuring them an entertaining and rewardable shopping experience. Hundreds of awards, including a brand new Nissan X-Trail, were handed over to lucky winner in the previous editions of the promotion.

Dragon City is a first of its kind project in the Kingdom of Bahrain and it includes Dragon Mall, Dragon Apartments, the Thai Mart, Dragon Plaza and an allocated area for warehouses. It is home to more than 787 commercial units, effectively making it the largest wholesale and retail trading centre in the Kingdom. 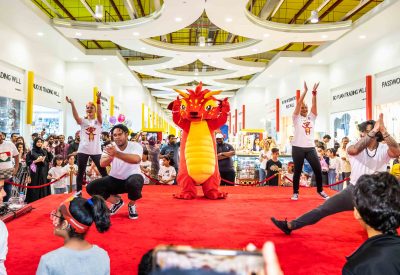 Dragon City Unveils ‘DiDi the Dragon’; the New Face of the City

Concurrently with the Kingdom’s Eid Al Adha celebrations, Dragon City, the largest whole-sale and retail trade centre in Bahrain, unveiled its most-anticipated mascot; DiDi the Dragon, in a delightful celebration that was held on the 11th and 12th of August (first and second days of Eid).

Held at the centre of the iconic mall, the celebration was attended by hundreds of children and their parents, who gathered to see DiDi, take pictures with him and join him in group dances and many more fun activities. This also included face-painting, interactive dancing, colouring and drawing activities, folklore shows, raffle draws and more.

Many amazing gifts were distributed among the attendees, such as entry tickets and free jet-ski rides at Marassi Beach; one of Bahrain’s finest beaches, shopping vouchers, free playtime and rides at the mall’s play zone and a lot more.

DiDi; little brother in Mandarin Chinese, is an adorable, fun and friendly dragon, who has been chosen by the management of Chinamex, Dragon City’s operating company, to be the face of the mall and represent it in social events and activities.

The début of DiDi comes within the strategies of Dragon City to preserve its position as the leading shopping centre in the Kingdom of Bahrain, being the first choice for shoppers from Bahrain and the neighbouring countries.

It’s worth mentioning that Dragon City is a first of its kind project in the Kingdom and it includes Dragon Mall, Dragon Apartments, Dining Village, Dragon Plaza and an allocated area for warehouses. Dragon City is home to more than 787 commercial units, effectively making it the largest wholesale and retail trading centre in the Kingdom of Bahrain.

Located Southwest of Diyar Al Muharraq, it is strategically located in close proximity to Bahrain International Airport, the Khalifa Bin Salman Port and the Capital of the Kingdom of Bahrain, Manama, making it ideal and providing easy access to customers from both the Kingdom and beyond. Dragon City gives to its customers, including local consumers, trade customers and tourists, access to a wide range of offers and high-quality Chinese products. 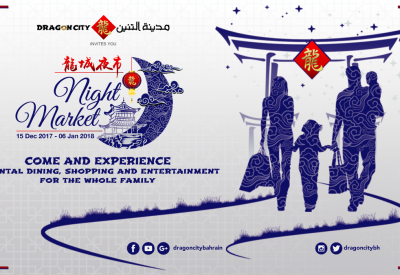 Dragon City, the largest whole-sale and retail trade centre in the Kingdom, is organising “Dragon Night Market 2017”. The annual fixture following the success of last year’s event is to be held from 15 December 2017 to 6 January 2018, opening from 4 PM to 10 PM on weekdays and weekends.

Dragon Night Market is a family-oriented outdoor event which features the unique triple combination of a great shopping, dining and entertainment experience. Tenants of Dragon City, as well as hosted vendors, will exhibit their variety of products at Dragon Plaza, located in front of Gate 12 of the mall. The stalls will provide shoppers with attractive promotions on products ranging from electronics, children’s toys, clothes, accessories and many more, in addition to food stalls serving delicious snacks and delectable cuisine items. The event will be set amid a beautiful Chinese-themed backdrop, reflecting Dragon City’s roots in heritage. 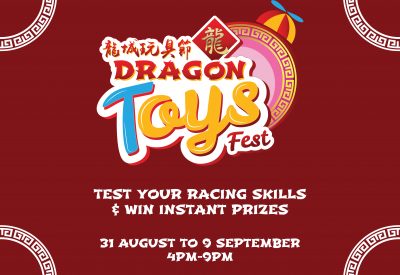 Dragon City, Bahrain’s largest whole-sale and retail trade centre, is hosting its first “Dragon Toys Fest”, an exciting event for children this summer season. The event will be held from 31 August to 9 September, at the Centre Court of Dragon City. The upcoming Dragon Toys Fest will showcase the wide variety of toys which Dragon City has in store for children of different ages, from young children right up to teenagers. The event, which will extend over a ten-day period, will feature a lively competition for remote controlled cars on a specially designed racing track. 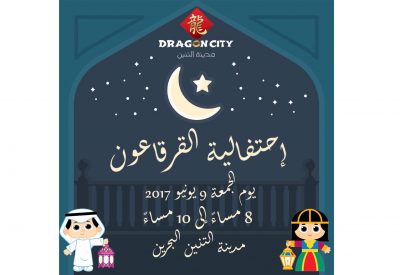 The event will take place from 8 PM to 10 PM at the centre of the mall on Friday 9th June 2017, which will be decked out in beautiful Arabic-themed decorations to honour the inveterate tradition, celebrated across Bahrain and other gulf countries in the middle of the Holy Month of Ramadan. The invitation is open to all families with children to spend a wonderful time at Dragon City in celebration of this special day. 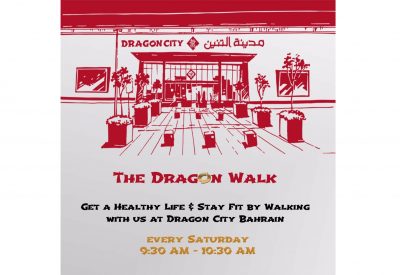 Do you want to Get a healthier lifestyle?!.. now you can get it with us just join the “Dragon Walk” program and get some healthy tips from our certified personal trainer every Saturday from 9:30 AM to 10:30 AM starting from 13th May at Dragon City Bahrain!

And yes we have free cool T-shirt for you.. only if you’re one of the top 20 participants
Note: use Gate 10 in front of the dining village to enter the mall and enjoy your walking!